An App to Drive your Boat? How to drive with a phone or tablet! 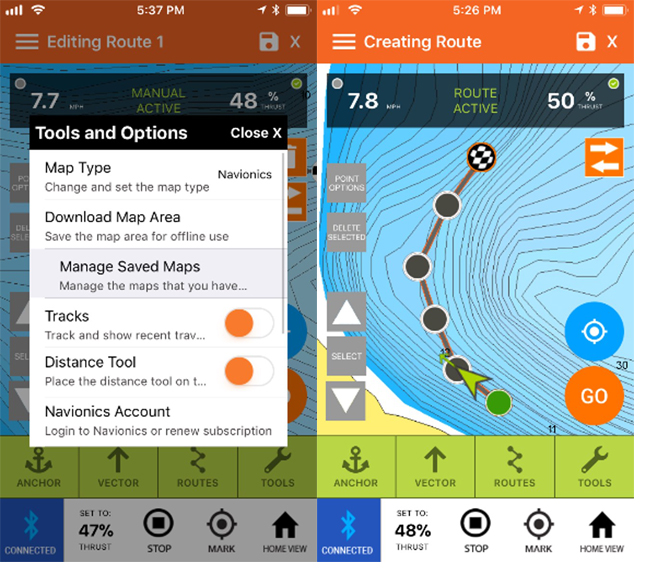 The explosion of mobile and cloud computing in the past decade has ushered in an entirely new industry, often referred to as the “Internet of Things” or “IoT”. Today, many cutting edge products are being sold that have compatibility with a mobile app, greatly increasing the usability of the product. One example that everyone is familiar with is aerial drones that can be piloted from a smartphone or tablet—in this case mobile computing enabled this technology to become accessible and affordable to most consumers. The ability for products to connect to a mobile platform gives the consumer an intuitive user interface, connection to powerful computing and data sources, and the ability to connect with other similar users, all in real time.

Smartphones and tablets are not just for the technically savvy anymore. These devices have become ubiquitous among the vast majority of individuals, of all age ranges and demographics. Mobile technology continues to decrease in price, making it affordable to most, and the devices have become more than just a communication medium and have largely replaced the functions of the personal computer. As devices have advanced, becoming more powerful, rugged and capable, users have shown an increased tolerance to having their device with them at all times, and in all conditions. Many smart devices today are waterproof, can withstand being dropped on cement, and there are numerous solutions to provide additional ruggedization including cases, cradles, screen covers, and portable power solutions. This has opened the door for utilizing smart devices in harsh environments such as the outdoors and even on the boat.

ProNav Marine has pioneered the use of smart devices in automatic navigation designed for fishing. Rethinking the design architecture for automated boat control has allowed a cost-effective and highly-capable solution compared to what has previously required significant additional hardware to perform.

The ProNav team believes that if a product is easy to understand and use, it will increase the angler’s success and provide them with a higher percentage of time doing what is their true purpose, enjoying a day on the water. Design elements such as number of screen clicks to obtain a desired action, functional grouping and context-driven controls are what drives the design of the ProNav app.

ProNav developers work closely with customers to determine how their product gets used in the field and are also fishermen themselves. ProNav’s development team has invested significant time and effort to ensure highly used functions are presented prominently and require only a single press to activate. For instance, the ProNav home screen presents easy-to-use manual controls that mimic a hand held remote control and quick access to a single press anchor and single press vector heading lock. Additional features can be accessed for any of the ProNav GPS functions by long-pressing the icons for advanced usages. For example, setting an anchor point at a specific location on the map, accessing a stored anchor point, and providing a map-based vector heading are all accessible through a long press on their respective icons.

Visual Power of the Map

One of the most powerful features of having a screen available is to be able to visually present to the user information for situational awareness. When fishing, anglers will want to orient themselves in the body of water relative to contour lines, structures or shoreline. The ability to visually study this information on a map allows one to quickly make decisions, and interact graphically with the map, adding points to control to and adjusting their location. In addition to real-time interaction, when users have stored past marking and route information, they can see their history over time of caught fish and productive waters, indicating locations they may want to target.

The free mobile app provides motor controls in addition to high resolution mapping that can be cached (saved) for offline use—this allows the ProNav Anglers system to operate seamlessly off the grid where no mobile data is available. For an additional small cost, Navionics bathymetric lake charts can be viewed in the ProNav app as an optional mapping layer—users can view and create their routes and points using these maps layers and also have the option to easily toggle back and forth between them.

ProNav Marine has pioneered the use of smart-devices in automatic navigation designed for fishing. Traditional thinking in the marine electronics market has large dedicated hardware components with specific and limited functions. While this hardware certainly is powerful and has its perks, namely built-in ruggedness, weather resistance and permanently mounted screens, re-thinking the hardware to utilize the power of the quickly growing and rapidly maturing smart and connected devices allows for greatly expanded and easily upgradeable features. Most people purchase a new smart device on average every 2 years. This is computing hardware that most people have with them at all times, which has the newest electronic hardware, data systems that are current, and information that is real time.

ProNav pairs a compact, plug-and-play GPS unit on a basic electric trolling motor (click here for compatibility requirements) to a user’s mobile device via a wireless Bluetooth connection. This eliminates unnecessary wires and network connections that are required between conventional electronics. Competitors offerings for trolling motor GPS autopilots include high end electric trolling motors such as the Minn Kota Terrova or Ulterra, an expensive chartplotter that requires years of experience to learn to operate, a GPS motor head replacement, network cables that link the trolling motor and chartplotter, and lake map SD cards that cost as much as 10-15 times the cost of a mobile Navionics subscription. This conventional solution can cost anywhere from $1000 to upward of $2000 more than the ProNav system while offering even less functionality and locking you in to a specific family of products (i.e. Minn Kota, Humminbird, and Lakemaster).

Another important benefit of utilizing an app for control, is the feedback presented for system improvement. This can be extremely useful for the manufacturer to take user feedback into account, and continually improve the system. Traditional hardware feedback will rely upon the user to send usage statistics and identify issues through slow and disconnected mediums such as email and phone calls. The data from an app is already connected, this type of system is known as the Internet of Things (IoT), and has been rapidly expanding in many fields, including automotive and home automation in the past 5 years. In an application such as boat control, this data may be used to dial in more accurate algorithms, implement new features and fix issues. This compatibility allows the user to be able to get the “latest and greatest”, de-risking their time of purchase locking them to a level of technology. ProNav believes your fishing electronics should always be up to date and has developed an easy-to-use, wireless software update process.

Try a demo of the ProNav Angler autopilot by downloading our free app from the Google Play Store (ProNav Android App) or the Apple App Store (ProNav iOS app) and see how easy route creation and following is!  By creating and following a route along drop-offs, shorelines or contour lines, you’ll have totally hands-free fishing so you can get rigged up, fight fish, and net your trophies.  As we like to say at ProNav, “We Drive. You Fish.”

To learn more about the ProNav Angler GPS autopilot visit ProNavMarine.com, and check out our YouTube page here.  For any questions, please feel free to give us a call at 906-523-7007, or fill out our contact form—we will give you a call!